6 Reasons: Why Do Cats Chatter? 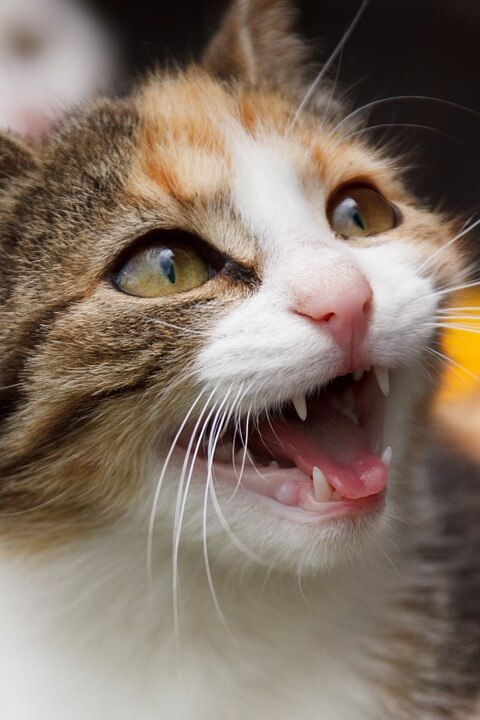 Have you ever queried what cats are doing when they’re standing by the window belting out in own strange cat language? If you look closely, there may be a bird, or a squirrel, or even a mouse right outside that window, and mocking them. But, if you are not familiar with that weird sound, then maybe cats are chattering.

No, they’re not speaking in the way humans do. Cats make an assortment of different noises from chirping like a bird, creaking, and over one hundred vocal sounds. Cats are perhaps the most vocal out of any animal species.

While some cats are more vocal than others, each feline will make its range of sounds. Which also means they’re able to copy how their prey sounds! Neat, huh?

A cat’s chattering typically refers to a cat in the midst of hunting. It is an entirely typical thing in cats. And it proves in several research studies too.

Based on research from scientists during an expedition in the Amazon Rainforest, there are six different reasons behind why your cats chatter.

The first recorded evidence of a cat chattering was during an expedition in the Amazon Rainforests in 2005. Scientists witnessed a wild cat known as the Margay. Similar in size to a domesticated cat, the Margay has much longer legs.

While scientists were studying a group of pied tamarin, they were alerted when the Margay was vocalizing similar noises which alerted the pied tamarin nearly walking into the trap.

All cats can mimic their prey, and even jaguars and pumas. The way a cat will chatter is either rolling their lips back or because of the modified scent glands in the roof of their mouth.

Cats will study their prey’s noises very carefully and then sync the others calls with own vocals to create a reminiscent calling, and even gnashing its teeth together.

1. Anticipation or Even Excitement

Everyone has those days where they’re thrilled and can’t stop expressing it. We vocalize our excitement or even our pain. Cats will also communicate who they are happy upon noticing their prey.

Chattering is also a cat’s way of showing off and express her interest. A little dark, but all hunters are satisfied whenever they see the perfect victim.

A good sign is that they may also be chattering because they’re happy to see you walk in the door after being gone the whole day. Here’s a fun fact! You’ll also be able to tell that your cat is excited as their whiskers pull back along their faces, touching their mouth.

2. A Cat is Frustrated

Although cats are semi-domestic animals, their instincts drive along with the wild blood from their ancestors. It’s not easy when a cat’s prey is standing right in front of her, but with glass blocking her from jumping at them.

We all have days where we’ll vent about our frustration. Unbeknown to ourselves, we may even end up talking aloud like a crazy person.

The act is also known as ‘vacuum activity’ according to Desmond Morris, a British zoologist. Vacuum Activity is a definition of a cat’s instinctive behavior in the act of reacting to the inability to performing in hunting.

Due to this window being in the way, your cat vocalizes that frustration to you. Of course, it’s safe to keep your cat inside. However, you’re probably going to hear your cat’s frustration from not being able to capture its prey. It’s best to distract them with a little treat or a toy so you won’t have to hear it all day!

3. Maybe Cats are Mimicking Their Prey

As scientists have observed through their studies, cats can easily mimic their prey. They can make any sound from birds chirping to monkey’s howling!

Chattering may be a hunting technique to lure in their prey. The other species hearing a call which is so recognizable to their own will not retreat and instead explores. Once the victim is in close range, the cat will make its deathly pounce.

4. Instinct is the Key

Chattering is all a part of a cat’s instinct. It’s all based on cat’s responses and even the hunting techniques involved. Don’t underestimate your little kitty because all cats can hunt. And they’re successful in their prey.

5. In Need of a Dental Check

Before you spend many hours on this enticing topic, your cat’s chattering could also be a sign of dental pain. If your cat is not staring down its prey out the window, then it’s time for a trip to the veterinarian.

There are six different cat vocals which break down their communication. Chattering can either be a greeting, a plea for food or attention, a complaint, or even if they are in anger or pain.

The sounds that we typically hear from cats are meow, chirrups, hisses, purrs, chatter, a growl, and onomatopoeic, the most common cat noise.

It’s tough to decipher what they want. As the cat’s owners, it’s important to take note of their behavior, so that they can have what they need and won’t be chirping all night long.

Kittens will adapt to chattering from their mothers who use this form on communication support and also get their attention.

Cats live a unique life. You never know what to discover next. Chattering is a hunting technique for cats to lure in their prey by copying their vocals to imitate a sound so real that it even fools you.

Cats will not meow just for the sake of hearing their voice. Research the different vocal sounds and even chirping so you can connect with your cat. Understanding your cat can instantly build a stronger connection too.

Now you understand how cats catch a mouse or a bird so easily. It’s an entertaining scene to witness. Take a video and upload it online. If you don’t get an opportunity to behold this scene, then don’t worry! There are hundreds of cat chirping videos you don’t want to miss out.