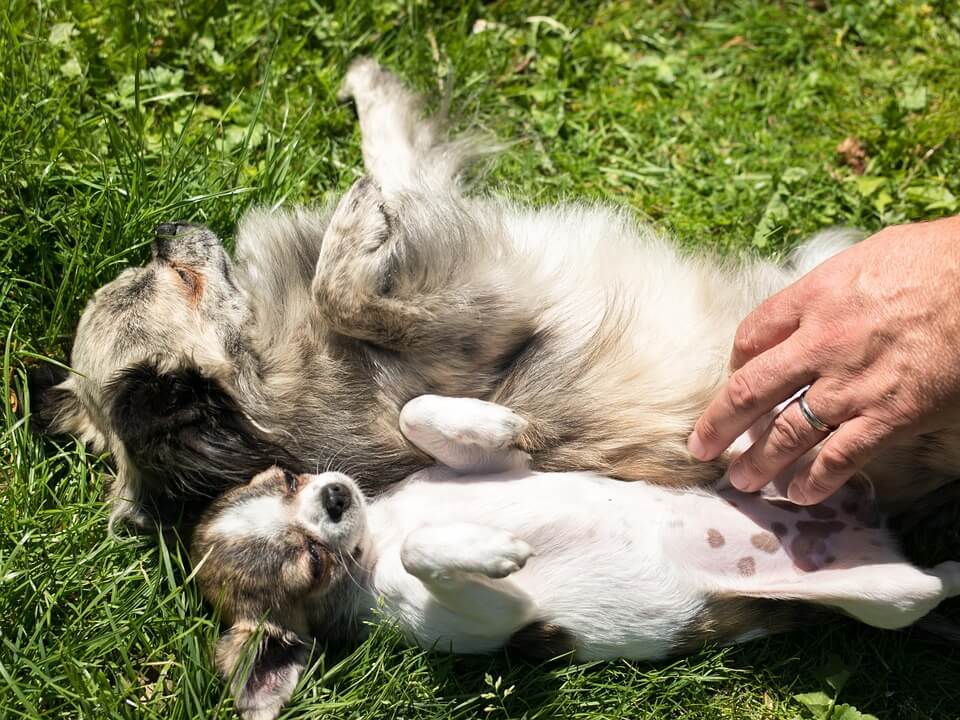 Have you ever thought why your dog wants you to rub its belly? Most of you might have seen him, demanding more and more once you stop doing it. The probable reason might be he loves it. Just like they are quite sensitive to sound, their hair follicles respond better when you brush your hands over them. His brain gets stimulated when you touch his hair follicles.

If we get to the bottom of it, the scientists say that they show interest in belly rubs because it is how they socially groom each other. It is often mistaken as their meekness to their caretakers. They enjoy the company of being with each other.

The dogs have a habit of lying down on their back and signaling their owners to rub their back. The canines do this when they believe and love you.

They submit themselves before their caretakers for a pat or a gentle massage in his belly. They also love stroking their back very much. These actions are all the expression of human affection or love.

The canines respond significantly to these acts of comforting or symbols of intimacy. If a dog shows affection through his tails, we humans, show it through the hands! There is an exciting finding that the brain of primates and animals, which are mammals, get stimulation when we touch the hair follicles.

Improves Bonding With Your Dog

This social behavior will help you to improve the relationship you have with your canine companion. As per veterinary Dr, Peter Brown, in California and Washington, it is a way to strengthen the bondage with your dog. Some other group of veterinary Doctors says that the change in the character of these predatory animals may be due to their domestication for years.

It is true that they are the descendants of wild wolves who are deadly predators. Over the past years, we can witness a significant change in the behavior because of the care and affection of the dog owners.

Previously, when a dog lies down on his back, it was understood as their submissive nature. But, why does it lay down while playing with its friend or in front of you?

The reason is they want that soothing touch on their bellies which make them feel good. Another probable cause may be the dogs are trying to defend themselves from an attack from its fellow canines or to be in a better position to resist a possible fight with his friend.

Is It Okay to Rub the Dog’s Belly?

It is quite common for all the dogs to lie down comfortably on their back showing their bellies to you for an affection filled pat. By scratching their stomachs, they are looking for your attention and love. It is the sign that they crave for your friendship.

That’s mainly because almost all the dogs love scratching their stomach. Some dogs don’t like it. They consider it as threatening cues and hate it very much. You have to look for the response of your dog the first time you try to pat its belly.

When he likes it, he will wag his tail and lie down in total submission. Instead, if he doesn’t like it, he will hold his tail between his legs and behave nervously. Your pet will snarl at you if he is irritated by your behavior.

You should always be careful to avoid patting its tummy if he is expressing nervous behavior or bark at you. It is a signal that you should stop doing it.

Scratch or rub the dog’s belly, only when it shows its tummy for you. You can scratch gently, or massage in circular motions on its stomach. Very rarely, a dog’s aversion towards belly rubbing can be a symbol of hidden stomach problems.

How to Know Whether Your Dog Doesn’t Like Belly Rubbing?

If your dog turns its eyes away from you, it is a symbol of dislike. The dogs who are not happy will start barking loudly and fiercely. If your dog starts whining loudly, you can understand that your dog doesn’t like it. And the dog is not ready for a tummy stroke. If it happens, back out, immediately.

Why Does My Dog Stretch Its Legs While Getting a Belly Rub?

Whenever you pat your dog’s belly, he kicks back. Why does he do that? Just like we humans, kick back the person who tries to tickle us, they also kick back due to the spontaneous action of their body.

They do the same reaction when a bug gets into the dog’s back to suck his blood. When we rub our hand over its belly, the hair under that part of the body becomes active. It, in turn, enables the nerves in the spine.

Many vets use this trick to identify health problems in dogs. This reflex action helps them to defend against an intruder who sits on the body to harm him. He, then, will use its might to drive away the parasite out of its belly.

It is similar to the response our spinal cord gives when we touch a hot iron box. The spinal cord instructs your hand to take away that part of the body from the hot iron box before more harm is done to it. Just like that, this reflex action is stimulated from the dog’s spinal cord to protect himself from a probable danger.

In short, the canines love gentle scratching on their belly. But, if they show a grinning face or displeasure, you should stop doing it. They will go to the extent of biting you if they are afraid of you. You should always take care not to pat its tummy, unless and otherwise, a dog shows it to you.

When the dog loves and trusts you, he will roll over his back and ask you to pat his belly. These canine creatures crave for attention and love. When you pat their stomach, they become happy because they fell secured and protected. It’s likely that they will feel so glad to be in your company.