5 Reasons: Why Do Dogs Sniff Butts? 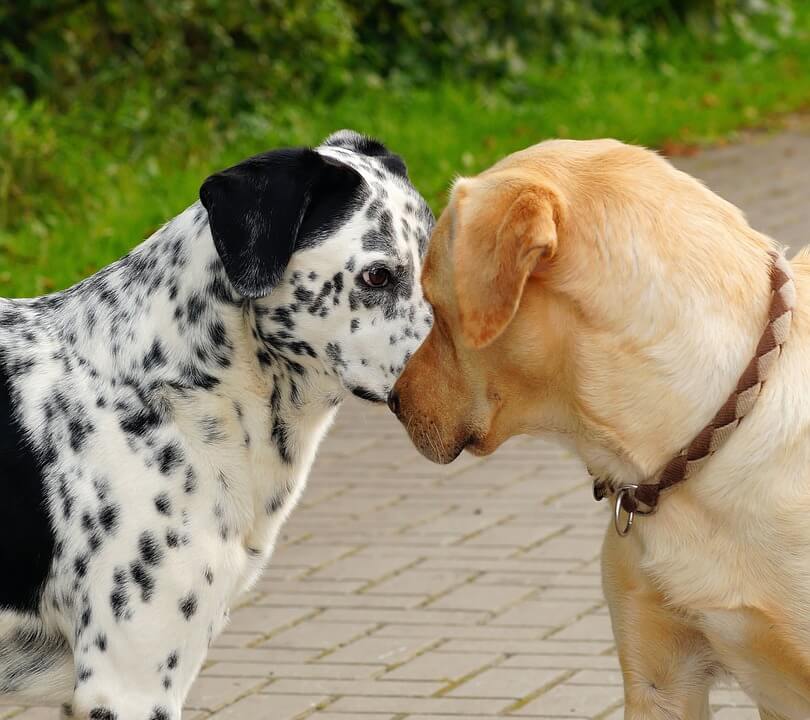 Does it feel so awkward if you get to see dogs smell each other’s butts? Why do dogs sniff butts? It is true that it sounds and feels strange to notice this behavior. But, by doing that, they don’t breathe their friend’s rare.

Instead, it is a means of getting introduced to each other. Dogs try to understand whether they have met before or they are meeting for the first time. It is a means of greeting just the way we shake hands with each other when we meet up with our friends.

Their smell receptor membrane is so compelling to recognize a lot of things through smell. Our nose has an olfactory layer that has 5,00,0000 receptors compared to dogs. They have 225 million receptors.

When they snuffle, they can find out, whether the companion is a male or female dog, whether they are in heat cycle for breeding, the exact age of the dog, the other dog is healthy or an out of sort dog.

The dogs have a unique Jacobson’s organ, in their snout, that detect the glands that release chemicals. This particular chemical helps them know many things about a dog. It also helps them to ignore the bad odor of the fecal matter of the other dog.

It is the usual canine way of welcoming a counterpart. Also, it is the typical behavior of dogs to smell anything and everything because this is the way they understand and sense many things. It is one way of communicating and getting to know each other better. Their snouts catch and pass on many things about their friends.

If you have a pet dog, you would have seen this behavior in them. Dogs have a habit of smelling human crotch. Even though this behavior is highly disgusting, they do it to know and understand the caretaker.

But, as a dog owner, you should never encourage this behavior because your neighbor will start complaining about his reaction if he troubles him.

If you allow your dog to sniff butt of his fellow canines, it will develop a healthy relationship among them. It will discourage them from displaying aggressive behavior. Every dog loves to be sniffed and likes to sniff other’s butt. Some may smell for long hours, and some may inhale for a shorter duration.

If the fellow dog is comfortable with the other one sniffing its rear, don’t worry.

Otherwise, you should keep your dog away from the other. Never allow your dog to stay too much time in another dog’s company. When they get to comprehend each other better, they will go to the extent of fighting with each other. Allow them to be in each other’s company for some time. After that, separate them to avoid a sparring match between them.

The anus is the part of the body that has a lot of glands in the body. When a dog sniffs the nether regions, it tells them a lot of stories about the friend. It is the way they recognize each other just the way we perceive each other in the face.

Just like that, they recognize their close friends by the smell. It is their daily routine, and you don’t have to feel awkward if he does it when you take him out for a walk or a stroll in the nearby park. Let him socialize with his friends.

These dogs smell not only the dogs’ rear, but the cat’s rear, and human crotch. But, why do they sniff human beings?

Why Do Dogs Smell Human Beings or Owners?

By now, we have understood that these canine creatures are smell oriented. Their snout sniffs the area between the thighs and the knee in the human body seeking information about a person. We, humans, feel bad when he does that.

He is trying to find out information just the way we read the status messages that our friends update on Whatsapp or Facebook. Our human body produces pheromones that convey all the information about us. These glands that produce the chemical is concentrated more on our genitals and armpit area.

He sniffs groin to know the exact character of humans. In women, he gets to see whether she is in her menstrual cycle and whether a particular girl is pregnant. Moreover, in dogs, the glands that secrete a hormone that helps him detect the information is spread all over the body and, in humans, it is divided into the groin and butt area. So, the Tomy sniffs that area, mainly, leaving us embarrassed!

Sarcastically, there were instances when people mistook doggie’s behavior for sexual harassment. Some have gone to the extent of filing a case against the dog. We should never humanize the dog’s behavior because they are trying to understand us rather than sexually assaulting a girl.

The owners should be cautious in training the dog not to sniff the private parts of the neighbors or guests. This behavior, even though, normal in dogs, irritates humans a lot.

This behavior has gone heights with people who have had a sexual relationship, recently. The girls who are new mothers, having a menstrual cycle, also feel very uncomfortable as they impolitely and uncontrollably sniff their genitals.

In short, it is a very natural behavior among dogs to smell the butts or genitals. There is nothing unusual to find your dog displaying such a habit. You don’t have to feel bad if your dog smells the rear of its friend, just let him do it.

This way, he will socialize with his friends, better. Instead, if he does it to your neighbor or your guests, you have to explain in your way that doing this to humans will make them angry at him.

The dogs are very brilliant animals who will understand your instructions, easily. It is good that a dog finds out all about a human being or canine counterpart in a second. But, it shouldn’t disturb others.