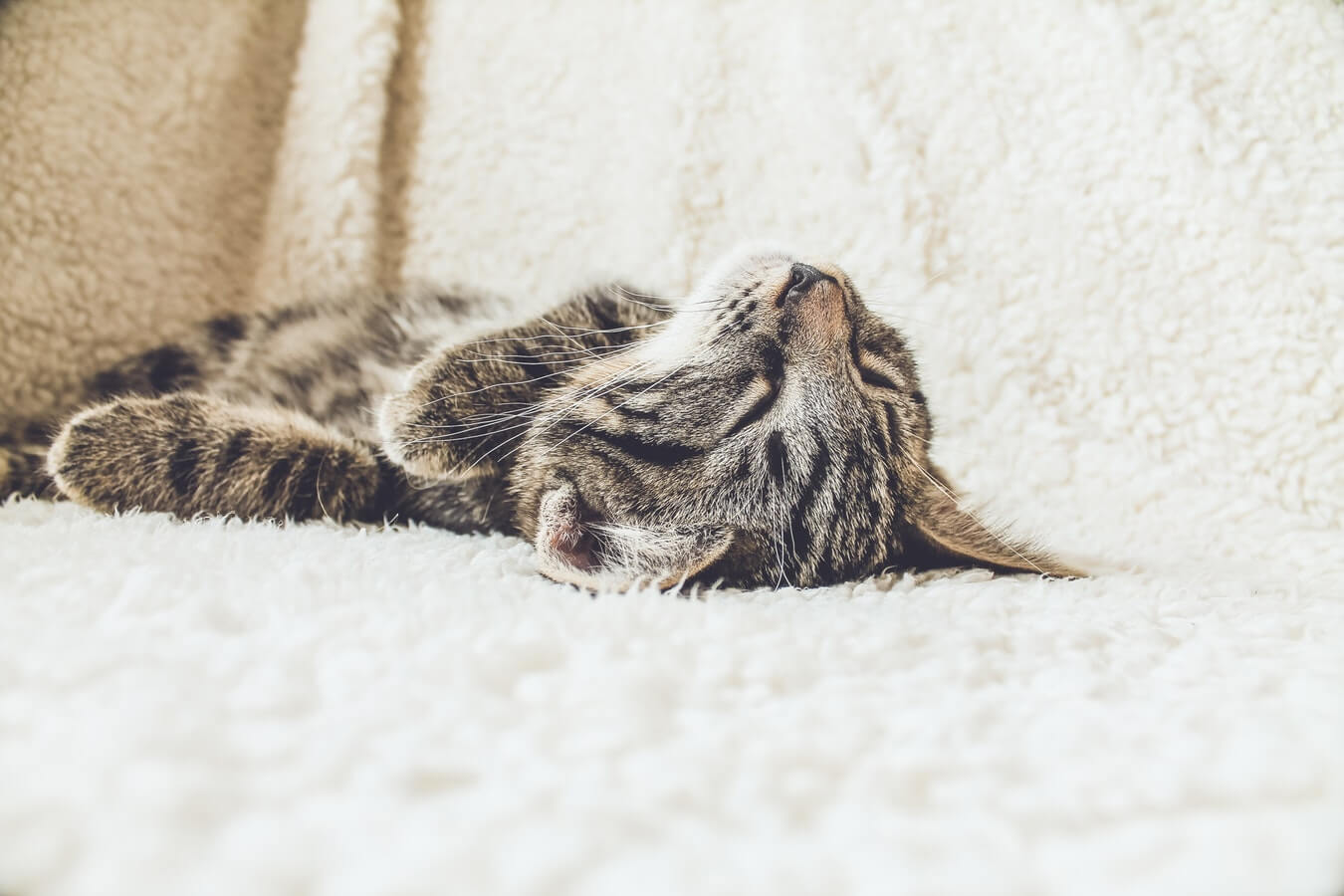 It is true that cats also dream. Cats tend to sleep for 15-hours a day. But for tired felines; they can sleep for up to 20 hours a day.

In regards to Dr. Nicholas Dodman-a professor at the Cummings-School of Veterinary Medicine based in New England-USA, he assured us that cats definitely dream. He further stated that felines also exhibit all the behavioral and physiological characteristics associated with dreaming sleep in humans.

They include; low voltage fast-wave activity and fast EEG activity where the cerebral cortex -your thinking center and hippocampus-you memory center, are active in the face-of continued behavioral sleep.

Often, behavioral sleep is characterized by lack of muscle potentials, unresponsiveness, super relaxed posture as well as an elevated auditory threshold. It’s commonly known as the sleep of the body in which the mind is still active.

How do you know your cat is dreaming?

There are many occasions you’ve witnessed your hairy friend moving its paws, twitching or even chattering when sleeping. You might have thought; maybe it’s because of the discomfort but instead, they were actually dreaming.

Before, it was uncertain if animals usually dream. However, after scientists conducted research on cats to monitor their brains. While awake performing tasks like running around to search for food. The result was then compared to the brain activity of these rats when asleep.

The same pattern was discovered that looks like rats showed when they were performing their tasks. It clearly proved that these rats were actually dreaming thus, made it more clear that, it’s quite likely that all mammals dream.

Why do they dream?

Before, we proceed to answer why cats dream; we will first start by understanding what dreaming is all about to help us understand the whole process of sleep.

Therefore, sleep is a natural state that is characterized by reduced consciousness, reduction or rather the cessation of sensory as well as voluntary muscular activity.

Just like in humans, sleep is essential to animals to aid in growth as well as repairs their body systems. Often, during sleep, the brain tends to process information gained as well as experienced during the day, especially those that have occurred.

There are majorly two types of sleep that include;

During REM sleep, the eyes of the dreamer move rapidly as well as randomly. Their brain activity pictures that of animals while awake. The dreamer might appear to be very active during this type of sleep though, it is tough to awaken them.

Often, dreaming occurs during REM-Phase of sleep. Generally, young animals spend more time while on dream sleep compared to older ones; may be to process new information. Now that you know cats also do dream, the next question to ask should be “what do they dream of?”

Cats can dream of anything that it does during the daytime, and while they fall asleep, they got processed and relived in dream-time. This can now clearly explain why they often whimper, run their paws as well as the twitching whiskers you normally observe.

Dreaming is the animals’ attempt to understanding all the information processed in the brain. In where the neurons are firing and in-turn their brain constructs a story-line to fit. And just like humans, the animals’ dreams may not be pleasant or instead based on realistic experience at all times.

Nightmares and more strange/unusual dreams might be our way of determining optimum/alternative ways to behave in-case that experience-happens in our awakened-hours.

Henceforth, just like humans, mammals also have quite similar sleep pattern or cycle as humans. That includes rapid eye movement phase which is the point in which dreams always occurs. Also, by matching feline as well as canine REM spots using their movements while asleep, some assumption can be made about their dreams.

Cats use the sleep to quickly-restore their energy as well as get ready for their next hunt. However, domesticated cats do not hunt for food but often; they sleep for the most of the day.

Sleep is necessary for both animals and human. Felines use sleep to survive and for a proper health condition.

During the day, they do and see many things. All these information are stored throughout the entire day and while asleep. The same information is suspended on their neurons for translation thus, resulting to dreaming.

What Your Cats Always Dreams About

Immediately you cat falls asleep, it is actually recalling the day as well as organizing it in the category. Thus, they collect all they have gone through, done, seen and experience and put them together to see the big clear picture.

Do Cats Have Nightmares?

Nightmares come naturally and mostly translate to the ordeal experience during the day. Just like humans, your feline friend also goes through bad experiences during or throughout the day.

Therefore, it is entirely reasonable for your cat to have dreams that are associated with adverse events that have happened during the day. Cats’ dreams are more related to realistic experiences hence; it is not strange for your cat to experience or rather have a nightmare.

Be warned not to wake-up your cat when dreaming. In that, if you observe it sassing or even making an uncontrolled movement when dreaming, waking your cat up can be a bad idea. It is likely to scratch or even bit you.

Just like in humans. When awaken while sleeping, they will not know what’s happening for quite some few seconds or moments but after they wake-up. Hence, they go for protection tactics which are always guided by instinct.

Cats actually dream, and during their REM sleep, their eyes tend to move quickly and randomly. At this point, their brain mirrors all the activity that happens when your cat was awake. You may see as if your hairy friend could be easily woken-up throughout this phase which is not the case.

To add it up, you’re likely to find that your older felines often spend minimal time during this phase, unlike the kittens. Main reason being, older felines do not need to process so much new information as the little cats.