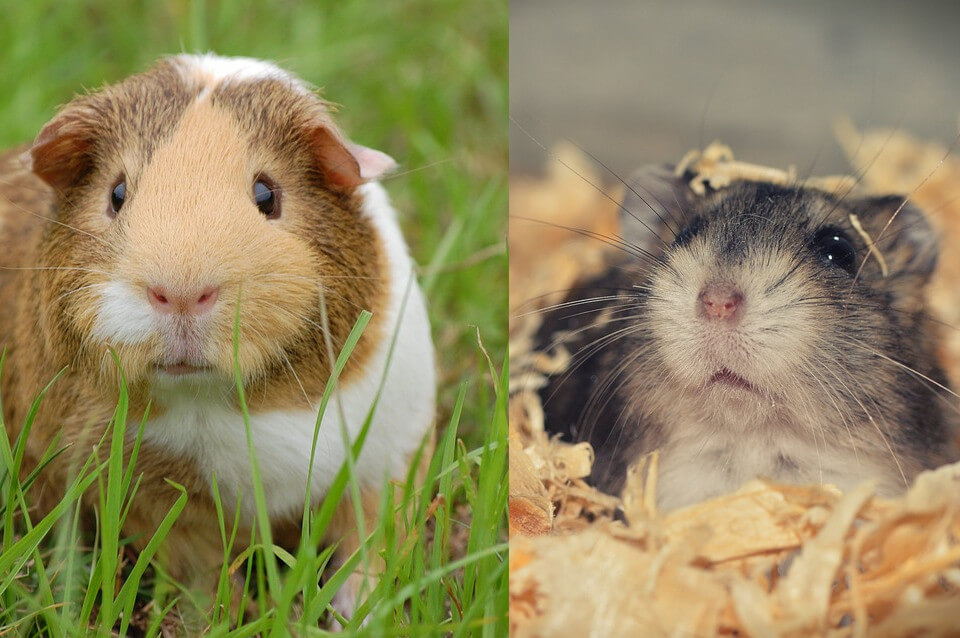 When choosing a pet, you can’t go wrong with adorable hamsters! But you may have looked at guinea pigs and also considered getting them, too. They’re both cute and have similar features. But hold up, since they’re so similar to each other, what makes them different and which is better to own?

It can be quite difficult choosing which one you want, but you’ll be surprised to know that they each have their own difference that makes one better than the other (depending on what you prefer). So read on as I show you all about the hamster vs guinea pig: which pet is the best for me?

What Are the Differences?

So, what exactly are the differences between both the hamster and guinea pig? Here are the key things to consider:

How Much Space Is Needed?

Because guinea pigs are bigger than hamsters, they’ll require bigger enclosures for happier and healthier lives. Furthermore, they’re more social and would be happier with a fellow guinea pig, meaning a larger space for them. Hamsters don’t have this problem, as they need less room and prefer to be alone.

I recommend that guinea pigs have a cage of up to eight square feet or bigger. Hamsters can have something smaller.

How Much Is One?

While hamsters and guinea pigs are priced similarly, the long-term investment for food and shelter can be quite expensive for a guinea pig. They require more bedding material, larger space, and more food than a hamster. Look into what you can afford in the long run!

Guinea pigs have a longer lifespan compared to the hamster. The guinea pig can live for between five to seven years, or even longer. On the other hand, hamsters live for two to three years, while some live only for up to one year.

How Playful and Loving Are They?

If you want a cuddlier and a more social pet, then you’ll want a guinea pig, which forms lifelong bonds. They love TLC and need to be played with daily. Hamsters, on the other hand, are more nervous and defensive, and can sometimes be hostile!

When Are They Awake?

Guinea pigs have the similar schedule as humans, awake throughout the day and roaming around their enclosure by day, and sleeping at night. Hamsters are the opposite and nocturnal. They usually sleep during the day and stay awake at night.

Many pet owners will prefer the guinea pig more, as they are more loving compared to the hamster. But this also means that they need more attention and care! So if you want a pet that’s low-maintenance, then a hamster’s best.

What Do They Eat?

Guinea pigs are herbivorous, so they strictly eat plants, hay, and pellets. They also feed on fecal matters, which have vitamins and nutrients.

Hamsters are omnivorous, consuming both meat and vegetables. They don’t need as much food as guinea pigs.

Female hamsters can give birth to 6-12 pups, or even up to 20 at times! Guinea pigs would only give birth to an average of two to four piglets, though they can also give birth to eight healthy ones.

Hamster and Guinea Pig TOGETHER?

I do NOT recommend that you have a hamster and guinea pig together. They have different dietary needs and personalities. With the hamster being more territorial, especially to bigger animals, they will act hostile and more fearful, leading to fights.

What Sound Do They Make?

Guinea pigs are known to be noisier than hamsters, sometimes making shrieks, screams, and more squeaky sounds. Hamsters are also loud, but not as loud as guinea pigs. However, hamsters are noisier at night, as they’re nocturnal.

If you want to know more about the guinea pig and hamster, here’s an informative video to show you more: https://www.youtube.com/watch?v=5OwnyrHfx0M

Now that you’re familiar with the differences between the hamster and the guinea pig, which is best for you?

Honestly, the answer entirely depends on what YOU want. There’s no definite favorite for everyone but varies on the factors mentioned above, from appearance to personality.

For me, I prefer a hamster, which is smaller and requires less space and food to survive (compared to guinea pigs. They also have a strong bond with their owners, which I love. However, they have a shorter lifespan, which is devastating since I grow attached to them!

Guinea pigs, on the other hand, require more daily care than the hamster for its long fur, though they are also lovely creatures that need a long-term commitment, as they have a long lifespan.

I recommend that you look into these factors and make sure that you get this as a pet for older children or adults. Yes, guinea pigs and hamsters do NOT make great pets for children because of their delicateness, making them easy to bruise if held too tight.

Regardless of the pet you choose, they are a family responsibility and must be taken cared well with love, affection, good food, shelter, and entertainment.

When it comes to choosing a pet, you’ll find that there are a host of differences for both the hamster and guinea pig. Your choice depends on what you need and want in a pet, from their attitude down to their specific appearances and personalities. There’s no “one pet is better than the other” for everyone, as long as you show your love and they work best for you.

Hopefully, this article answered your question “hamster vs guinea pig: which pet is the best for me?” Now that you’re familiar with the differences and find out which pet is suitable for your home to get one today!