8 Safe Ways to Break up a Dog Fight 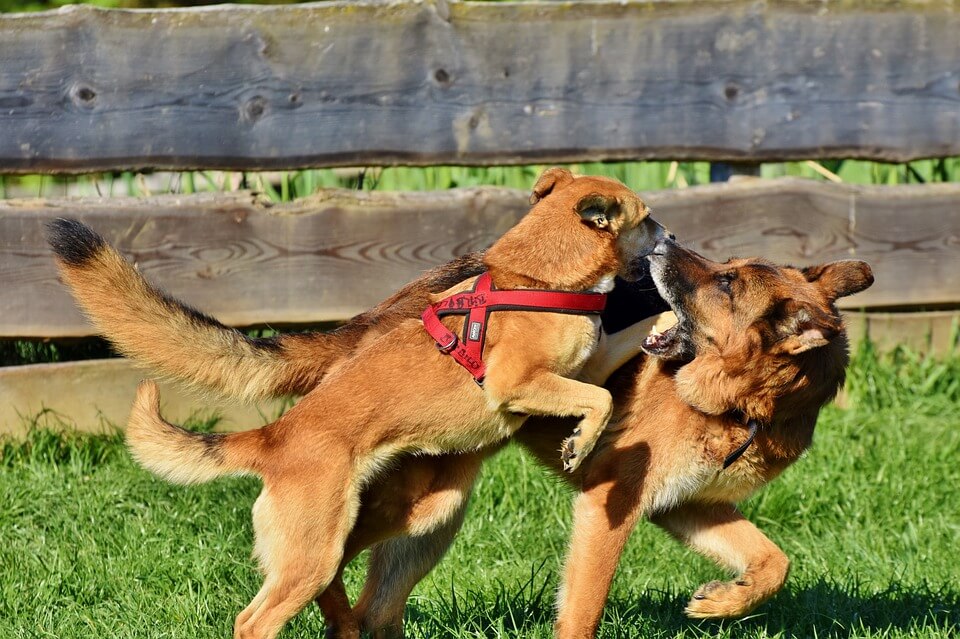 Dogs have different relationships with one another. Either they get along, or they don’t. You hope that they will get together in peace and become the best of friends. But, is it possible to create a peaceful relationship between the two dogs?

Dog fights are never safe. And the scenes are very off-putting. They’re vicious, and one of them is going to get hurt unless you don’t intervene.

It is essential for all dog owners to know how to break up a dog fight, most importantly when they’re alone. Let’s get the first rule squared away. Never grab a dog by their collar because dogs will only think that you’re another enemy.

Why Do Dog’s Fight?

It’s in a dog’s instinct to fight. There fighting is due to varying different reasons from food, toys, the sake of attention, or trespassing their territory. The battle is also due to a misunderstanding of communication. Not all dogs understand dog language or social cues.

Dogs are only protecting what is theirs. Fighting is also a battle to see who the dominant alpha dog is. Combat can also be mixed up with playing. First, to understand the difference between dogs fighting or playing is to interpret body language and behaviors.

When playing, their bodies are less rigid and more relaxed. Dogs also tend to be less vocal. The instant you notice biting involved is when owners should take action.

The Importance of Understanding Dog Language

To prevent a dog fight before it happens owners must understand a dog’s body language first and foremost. Observe your dog’s behavior, especially towards other dogs. Most dogs are either friendly or aggressive towards one another.

Playtime may appear too rough. Dog’s size plays a significant factor in roughhousing. It’s dangerous for a big dog to roughhouse with a small dog.

As mentioned above, playing can also resemble fighting. If the body language and mood of dogs no longer appear relaxed, they’re growling viciously, and their tails have descended that’s when owners should start to take action.

How to Break up a Dog Fight?

Witnessing a dog fight is not comforting in the least bit. Dogs have always been such a happy sight to all humans. Now seeing them like a raging monster changes your opinion altogether.

Don’t let a dog fight change your opinions about dogs. You need to stay calm. Dog scuffles could only last a few seconds.

Don’t ever try to grab a dog with its collar. You’re only going to get bit at if you physically take charge. Since dogs are at battle, you grabbing them by their collar to a dog looks as if you’re joining in on the fight.

The second rule is never physically to get between the fighting dogs. Again, they’re only going to mistake you as the enemy. However, if the dogs are smaller in size, then it’s okay to intervene physically. Don’t ever pick up a little dog. The bigger dog will only jump against you.

Never bribe dogs with a treat. No, it’s not the correct way to end a fight. It only encourages their bad behavior believing that if they fight they’re going to get a treat.

Before physically trying to break up the fight, use loud noise to distract the dogs. Yell at them. Threaten that they won’t get a treat at home. Shake a can filled with coins, stomp your feet, or use an air horn. Create any loud noise you can to disturb the dogs.

If loud noises are not working, use a squirt bottle to get a reaction you need to end the dog fight. If that doesn’t work, then a garden hose will stop the hot-headed argument.

Don’t violently kick a dog. While the dogs are not in the mood of biting at each other, that’s the moment to lightly tap their bodies with your feet to push the dogs apart. A light kick is only meaning to get their attention and not encourage the physical fight any longer.

It’s not recommended to physically use yourself as a barrier between the dogs at war. You’re only going to get an eye scratched out. Also, if the dog is outside on a leash confronting another dog who is not on a leash, quickly drop the rope. Straps are a choking hazard in fights.

Find a piece of cardboard long and strong enough to intervene between the dogs if you’re not comfortable doing this throw a blanket, or any type of fabric over the dogs to distract them.

7. How to Grab Hold of the Dog

From behind, grab their hind legs and left their legs off the ground. Then, walk backward mimicking a wheelbarrow. The wheelbarrow method is considered to be the safest way to break up dogs from their fighting.

To refrain the dog from biting at you, walk in circles, or to one side. If the dog is wearing a leash it’s leash may be able to help.

Once the fight has ended, keep the dogs separated. The fire is still brewing. Move them to different rooms behind closed doors or tie them to an object.

Remember, breaking up a dog fight is dangerous. As a proud dog owner, thus, it is your job to teach them how to play nicely. Teach them that attack other dogs, or even humans, is not okay. Train dogs from when they’re a puppy so they’ll listen to your commands.

Never physically intervene in a dog fight. You’re only going to get hurt. Follow these essential steps and remember to stay calm. Knowing how to crumble up a dog fight quickly is the most necessary and vital piece of information dog owners, or anybody needs to know.