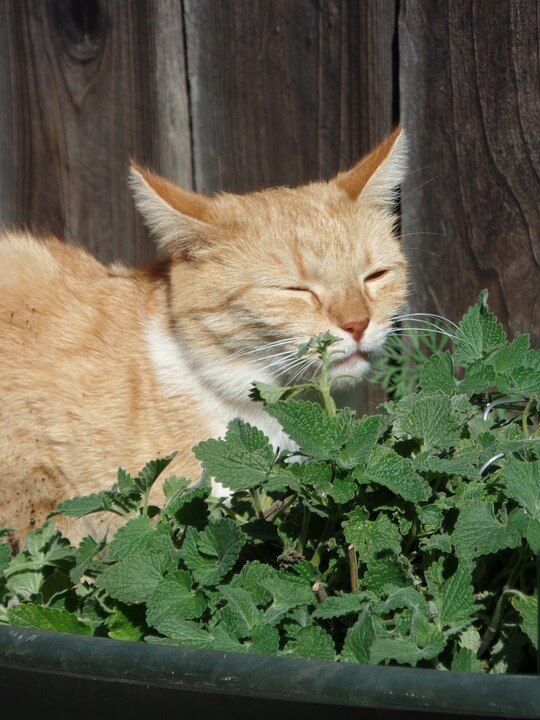 If you are a cat owner, then you might have heard some crazy facts about Catnips. If you are wondering those rumors are correct or not and does catnip make your cats high, then here we are providing you all the necessary information about catnip and its effects on cats.

Catnip is a herb that comes from a plant called Nepeta Cataria which belongs to the mint family. The herb is found in Native Europe, Asia and all across America. It produces a chemical called Nepetalactone which can incur some alcoholic effects in cats. The compound is contained in the bulbs that coat the leaves, stem, and seedpods of the plant. When the bulbs get ruptured, the mixture is released in the air which can be inhaled by the cats.

It is used for humans too as a sedative. But, the chemical is considered as a non-addictive and harmless substance for felines and humans.

What effect does Catnip have on Cats?

The Catnip sometimes acts like a drug for cats. But the real fact behind this is that the compound has a psychotic relation with cats. The chemical can bound itself to the receptors and stimulate various kinds of effects which leads to abnormal behavior in cats. Cat’s brain, olfactory bulb, amygdala, and hypothalamus will be affected and result in some alteration of the activities.

Scientists also have a hypothesis, that catnip also triggers a reaction in the vomeronasal organ which is an extra olfactory organ found in the nose of mammals except for humans. Thus, when cats get in contact with catnip, the Nepetalactone mimics the pheromones and bind it to the nasal receptors resulting in the intense and intoxicated reaction in the cats.

But the compound is not considered as dangerous for cats, so you don’t have to worry about the health of your cute little kitty. Another thing is that some cats are even immune to catnip’s effects. So it is not sure that your cat will always be affected by catnip.

How Cats get high from Catnip?

You must be wondering what exactly happens when a cat smells or intake catnip. Well, Science has the answers. Apparently, it is found that catnip replicates the pheromones and switch on the nasal receptors thereby activating all the neuron light-bulbs in the cat’s brain. Catnip produces an effect similar to LSD or marijuana. But luckily the effect only lasts for 10 minutes to half an hour. After that, the cat’s sensors will come back to the normal state.

How can Catnip be used on Cats?

There are two possible methods through which cats can get affected by Catnip. One is direct intake, i.e., eating, and the second one is sniffing or smelling. In either way, catnip has a different effect and leads to various reactions in cats. When it is eaten directly, then it acts as a sedative. But when catnip is smelled, it can make the cats go crazy as it activates all the nasal receptors.

Sometimes, cats even rub catnip on themselves in an attempt to bruise the leaves so that more addictive nepetalactone will get released from the leaves.

How would Cats behave after having Catnips?

Once your cats have smelled or ingested catnip, she will exhibit different behavior. If your cat has eaten catnip, then she will smush her face again and again in catnip. She might have a hallucination and get aggressive, or she might simply sit there and act like it is buzzed. The behavior will be just like a hard drug effect on humans. And every time she ingests the chemical, she will have a similar reaction.

If the feline has smelled catnip, then you will get to see her crazy moves. She will roll around on her back, and you will notice that your cat is out of control. She will no longer be able to control her mind and body as if she is going through collateral damage.

There are some other weird things too that you might notice. She will have bugged out eyes, a sense of disorientation, weird meow sounds, and she will frantically rub herself and roll around.

Is it possible that Cats can have an overdose of catnip?

No, not really. Catnip is a very common herb, and you might find it grown on the roadside and gardens. And almost 70-75% of cats get affected by catnip. Even if your cat has smelled it or eaten it in a large amount, then she will experience some symptoms for a short period and recover from it very quickly. The overdose could lead to puking, or her poop will turn into the river for a minute, but she will be back to normal really soon. It is just like having a hangover in humans. Luckily, catnip does not have effects that would harm the cats or raise some concerns. Even if the cat has overdosed on catnip, she won’t suffer from any permanent ill effects.

How can you prevent your Cats from being affected by catnip?

You will be amazed to get the answer. The only possible way which would immune your cat to the effects of catnip is to expose your cat to catnip more frequently. The more your cat gets in contact with the chemical, the more she becomes habitual and stops responding to it. So, you can try giving catnip to your feline once in every two or three weeks so that she won’t create a habit of having catnip and still become immune to its effects.

That’s all about catnip. The herb can get your cat high, but it won’t affect her health. So you don’t have to be concerned about it. The compound is also popular among humans as it is widely used for its sedative properties. The chemical also acts like chamomile and a powerful mosquito repellent. So, we can tell you for sure that catnip might get your cat high, but it is entirely safe for her.