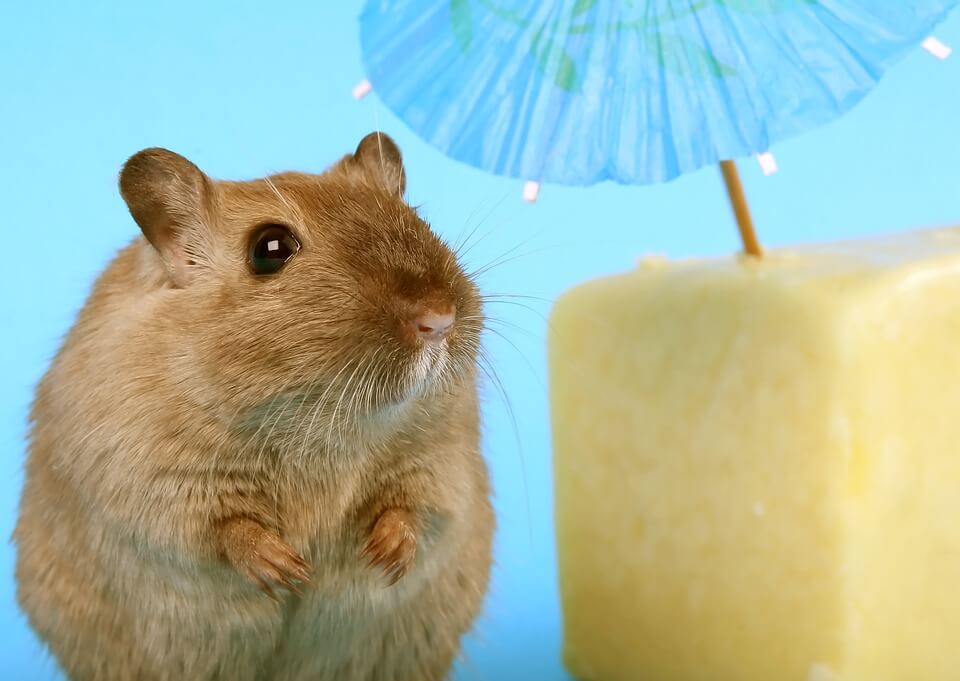 Many people who have hamsters would like to know do hamsters eat meat or not?

There are many non-vegetarians out in the world who like to give meat to their hamsters. All those people would be happy to know that hamster can eat meat. Hamsters are omnivores which mean that they are good with having vegan and non-vegan food items. Well, meat is a good source of protein, and it is essential to include protein in the healthy and balanced diet of your hamsters. So you can obviously give meat to your sweet little pet.

How can you feed your hamster?

As hamsters are omnivores, you can give them various food items which have nutritional values. The primary food for hamsters is grains which you can purchase from any store. Fruits and vegetables are also liked by them. But since hamsters can eat everything, you should consider giving them animal protein every once in a while. You can think about giving boiled eggs or a small chunk of chicken meat which would be beneficial for its health.
Besides chicken, you can think of other items too. Foods such as cooked beef, canned and non-vegan dog food is also safe for hamsters. The only thing you have to be careful is giving them the meat which is unseasoned. Never ever give salted or spiced meat to your hamsters in any form.

Many wild hamsters are often known to eat insects and other animal’s meat including crickets and mealworms too. If you have a dwarf or Syrian hamster, then you can also consider giving them dried or alive crickets.

Which kind of meat should be avoided?

The only kind of animal meat that should be avoided for a hamster is pork. Various people have their own arguments on this topic, but the real fact leads merely to the conclusion that pork should be avoided. Salt and fat both are harmful to hamsters. And pork contains both of these items in an excess amount. Thus, you must prevent your hamster from eating pork under all circumstances. Another form of pork should also be avoided such as steaks, sausages, hamburgers, etc.

Many people have heard this rumor that if you give your hamsters meat, then gradually they will become cannibals and end up eating their babies and other hamsters too.

But that’s not true. Hamster has been known to eat their babies after they are born but for different reasons. The behavior of cannibalism is not incurred by eating meat. When their baby is born unhealthy, and there is a lack of resources which ultimately leads to their death, then hamster eats their own babies. This is done so that they can prevent them from sufferings and pain. Sometimes, even an unclean or overcrowded environment results in the same actions, but eating meat has nothing to do with it.

How much food should you give to a hamster?

You will be surprised to find that hamsters eat several times a day. They eat a lot, and they sleep a lot. Usually, hamsters store the food in their pouches so that they can eat it later. Hamsters love having fruits, veggies, and meat but you have to be careful of the amount you give them. You might not notice when they store food in their pouch. Seeing their empty plate, you would think of putting some extra food on their plate. But this will lead to overfeeding.

They are small creatures and eating a large amount of food even the healthy ones could lead to some health issues in them such as diarrhea. A small cube of everything they like to eat is enough for them. The food hamster loves more than any other is a carrot. Even meat must be given once a week.

What are the other foods hamster can eat?

Some food that should be avoided is apple seeds, grape seeds, fruit pits, almonds, peanuts, garlic, onions, eggplant, chocolate, or other sugary and sweet things. The high water and fiber containing items are better for hamsters instead of seeds and nuts.

When should you feed your hamsters?

As it is a matter of disagreement, you can only observe your hamster and find out how many times it likes to eat. People think that it is better than they feed hamsters when they are active but that not right. Hamsters can get hungry anytime, and that’s why they have their own personal food storage pouch.

Many wild hamsters get out in the night to look for food. The same applies to the domesticated ones. Even though they are not in the wild and don’t have to go on a hunting trip for food, they also like having snacks in the middle of the night and throughout the entire day. So, it is your job that your hamsters have enough food all the time.

You will also have to take some precautions. Ensure that you don’t leave food on their plate to rot. It is essential that they have fresh food to eat and clean water to drink. Change the water every day and provide them with the food they like.

If you are unsure about the food items that you offer to your hamster, then consider consulting a vet. They will provide you with a list of things that can be treated as foods. You can think of buying treats from a pet store and watch your hamsters having a little feast of their own.

A small amount can never be harmful. So, don’t think so hard about giving meat to your hamster along with fruits and vegetables. Meat is healthy for them as long as you give them a small amount to eat.